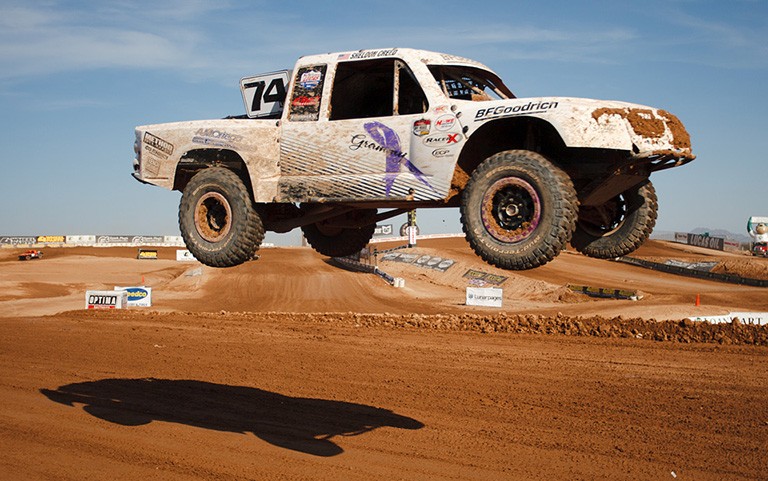 Sheldon’s love of adrenaline began at the early age of 3, when he took on BMX competitions. By age 5 and after numerous wins in the National Ranks, he had assumed the title of State Champion. One year later came a motor. Sheldon found a new passion for racing Motocross at age 6 and won his first race at Star West in Perris. After winning his first two Championship titles at Barona MX Park in 2005, Sheldon was justly invited to run the Jr. Supercross Challenge with KTM and took home a 2nd to add to his collection. At age 8, Sheldon began racing in a Quarter Midget, setting track records at the Orange Show that no driver has yet to break.
Once Sheldon turned 9, he knew he had found his passion in off-road racing. The introduction of Trophy Karts in Championship Off Road Racing (CORR) gave Sheldon a platform to show off his driving talents at a young age. He took a 4th place finish in the points championship his rookie year, and Sheldon has gone on to win a championship every year, since 2008, in one of the Trophy Kart classes. Sheldon carried on his record when he stepped up a class to take home the 2012 Superlite points championship in LOORS.
Now deemed the “Prodigy of Shortcourse”, Sheldon strives to live up to those expectations. In the 2013 season, Sheldon is on fire running his new Traxxas Pro Lite in the Lucas Oil Off Road Racing Series, where he is in the top 3 points battle. The young driver is also taking on Robby Gordon’s Stadium Super Truck series and showing promise in the stadium short course series already taking home a win and multiple podiums.
Current sponsors: Traxxas, BFGoodrich, AM Ortega Construction, Trench Shoring Co, Fox Racing Shox and Eibach Springs, GoRhino! Products, Method Race Wheels and Lucas Oil Products.