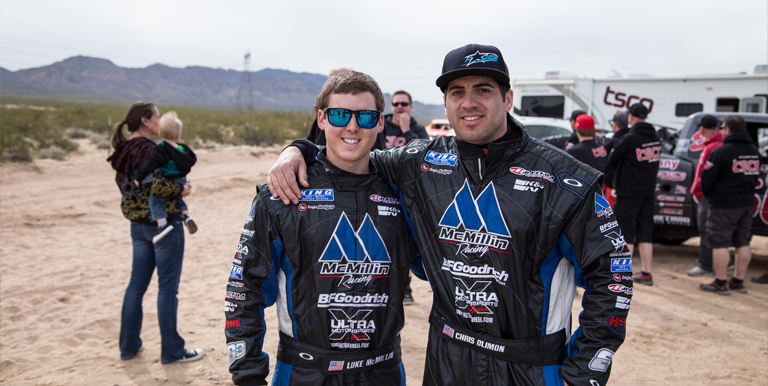 At a very young age, luke mcmillin became involved in off road racing, attending all races as a spectator, riding in pre runners and attending. At age 12 his father bought him his first real off road car, a beam 1/2 1600 car. At that time, luke began pre running as a driver. At the young age of 15 luke participated in his first official off road race, a small desert series called mdr in plaster city, where he finished every race he started, often in the top 3.
In 2010 was luke’s first season in the big series, score-international, baja racing. He was racing in class 1/2 1600, the most competitive limited class in the series. In 2010 he finished in the top 5 at every race and he won the championship.
In 2011 luke returned to the score series in 1/2 1600 again to defend his championship. In 2011 luke won both the baja 500, baja 1000 and championship.
In 2012 for the first time luke raced in class 1 (the elite unlimited buggy class), he was surprisingly successful. Winning his first 3 races in a row, which happen to be all 3 baja races, something that has never done before by another driver. In 2012 he also returned to race his 1/2 1600 car at the most competitive race of the year, battle at primm, where he would claim the victory there as well. It was a year full of wins.
In 2013 luke raced his first ever tt race for another team. It started off great; shocking everyone by mile 160 luke was leading the race overall on corrected time. By mile marker 400 they were in a tight battle for top 3 overall, when luke had a slight mishap and put the truck upside down. He finished 12th trophy truck. Currently, luke has been testing and racing all different kinds of tt’s for other teams. After lot’s of research and test driving other trucks, luke gave the green light and began the build of a racer engineering trophy truck planned to be debuted in the 2014 score international series.
Luke takes racing very seriously and treats it like a business. He races to win. Luke is one the most involved drivers in the sport and is more mechanically inclined than the majority of drivers and spends lots of time working on and researching the race vehicles. At the races he is constantly focused on pre running, practicing, and making sure the pit plan is the best it can be, which results in a victory for luke more times than not. Having learned and mastered the previous classes he has raced in, 2014 will be a year to remember with luke and the new masterpiece trophy truck they are building.