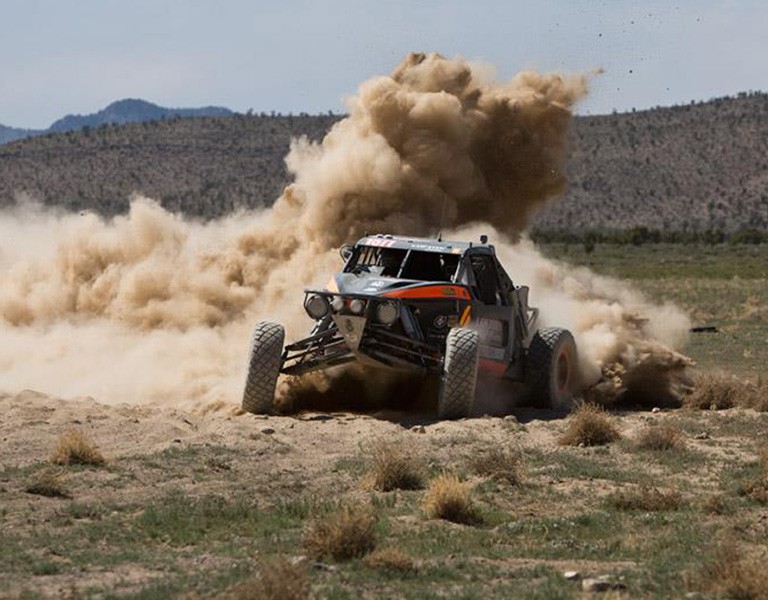 Justin Lofton was born on February 18, 1986 in Palm Desert, California Born to Bob and Andrea Lofton. Justin is the oldest of three children. Despite having two younger sisters, Justin never strayed away from fast and furious activities. At 25, he remains an avid biker, racer, and adventurer. Despite the demands of everyday life and his busy racing career, Justin stays grounded by spending time with his family in his native California. The Lofton family remains close by exploring the mountains surrounding their hometown during the winter months in the family Jeep.

A love for the outdoors is something Justin inherited from his parents. Growing up in the Imperial Valley, he embraced many of the agricultural resources that were available to him, making it was a natural move for him to join local clubs such as 4-H and Future Farmers of America (FFA). He showed animals, and displaying projects at fairs and jack pot shows around the Southwest. From the ages of 7 to 18, Justin participated in a variety of events, learning many aspects of the family’s cattle business and other skills that have helped him flourish with other business ventures over the years.

From 1995 to 2004, Justin earned multiple Bronze Star, Silver Star, and Gold Star awards. In 2000, he was recognized with the Junior Achievement award for being the most active 4-H member of the year. In 2002, he collected the Grand Champion honors in photography at the California Mid-Winter Fair. Justin also showed and won many champions in showmanship throughout California and Arizona with steers, pigs, poultry, waterfowl, rabbits, cavies, wildlife-pheasants, quail, and doves. Not just a participant in shows and festivals, Justin started the Waterfowl and Wildlife exhibits at the California Mid-Winter Fair.

While active in many clubs, Justin began homeschooling in the fifth grade. During his studies, he visited many landmarks during the family’s travels across the country. He has visited Washington D.C., Mount Rushmore, Crater Lake National Park, Yosemite National Park, Yellowstone National Park, the Black Hills and Badlands of South Dakota, Grand Canyon National Park, and the Rocky Mountains. He also traveled across the Great Plains. Though focusing on schoolwork, Justin’s competitive personality allowed him to excel in many youth activities like baseball and hockey. In 1992 he began playing roller hockey, and despite a short-lived break in 1996 after he broke his arm while playing hockey, Justin began playing piano and drums as therapy. To this day, you can often find him on a rink to this day participating in a friendly face-off.

Though he tried other sports as a child, what really sparked his interest was racing. Justin got his first taste of the competitive and fast sport while his father Bob raced off road machines. At just 9 years of age, Justin got the itch himself, and began racing bicycles in the ABA BMX Series. In 1999 Justin was third in the district 21 point standings courtesy of numerous podium finishes in national events. That same year he took to the mountains to compete in Downhill and Dual Slalom racing, along with wheeling his BMX bike in California, Nevada, Arizona, and New Mexico. In 2000, Justin won the right to display the #1 plate on his bike by winning the points championship for district 21.

The following year he was the champion in dual Slalom after collecting numerous trophies and titles, along with being a member on the winning team of the 12-hour downhill race in Big Bear, California. However, Lofton’s days on two wheels ended in May of 2002 after suffering a broken femur. He was sidelined from racing for over a year, and underwent 11 reconstruction surgeries before redirecting his career, opting for four tires and a roll cage.

He took to the mountains in 2003 racing the No. 20 Super Stock Mustang for Gay Smith Racing in the Colorado Hill Climb Association (CHCA). In his very first race he was fast qualifier and finished third in the race. The following event, he was fast qualifier yet again and earned everyone’s attention with his first race win. His prompt success earned him the CHCA Rookie of the Year.
In 2004 he followed in his father’s footsteps by moving to the rugged desert terrain throughout the Southwest, racing an Unlimited chassis limited motor buggy in the Best In the Desert (BITD) Racing Association Class 1000. He split driving duties his friend Matt Loiodice. That year they won three of five races, and finished second in the remaining two events. Justin ended the year second in overall points, won the BITD Rookie of the Year, and Class 1000 championship.
In 2005, Justin was looking for a new challenge and began his pursuit of a NASCAR career. His first step was by racing Late Models at the famed Toyota Speedway at Irwindale bullring, and from there his career took off. He earned a race win, numerous podiums finishes and qualifying awards, but something kept beckoning him back to the dirt as he looked to the top of Pikes Peak. He returned to CHCA to run the illustrious event, but suffered a rear gear failure near Boulder Park. The issue slowed his pace up the mountain.
sparks.jpeg
Lofton next moved on to the NASCAR Grand National West Series. He stayed in the series for two years, racing for his family owned team, Lofton Racing (LoftonRacing.com). Before the Grand National West Series schedule began in 2007, Justin wanted to test his road racing skills by racing the Grand-Am Series season opener “The 24 Hours of Daytona” in the GT class driving a Pontiac GXP-R.
The following season, in ’08, Lofton joined Eddie Sharp Racing  (ESR) in the ARCA Racing Series, and despite missing the  season opener in Daytona; Lofton proved that he was a contender out of the gate. After just three months and eight races in ARCA, Lofton scored the outside pole at Michigan International Speedway, followed by his first series win. Through the season he scored three top-five finishes and five top-10s along with two poles and three track records. Though pursuing new ventures, Justin couldn’t stay far away from the desert. The Lofton family purchased a Jimco Trophy Truck in order to enter the SCORE International Baja 1000.  Justin and his father Bob split the driving time. The Baja 1000 marked the younger Lofton’s first Trophy Truck event and his first race across the border in Mexico. For his class debut he called upon Matt Loiodice to navigate him through the sandy landscape. They finished an impressive fourth in their class.
The following season, in 2009, Lofton earned his first stock car championship, claiming the ARCA title with an impressive list of stats to his credit. He dominated the series en route to the championship, leading the series with five pole awards, 15 top-five and 19 top-10 finishes, in addition to three more track records. He showcased his diversity behind the wheel, earning six checkered flags with race wins spanning superspeedways to short tracks (Talladega, Berlin, Pocono, Chicagoland, Toledo, and Salem). He also led a whopping 1,005 laps spanning 15 races. That same year, Lofton made his NASCAR debut after qualifying in on time to the Nationwide Series event at Michigan International Speedway. He started the event 19th and finished an impressive 16th. Once the season ended, Lofton returned to California where he competed in an IMCA dirt modified race. He started the main event from the fourth spot before taking the lead on lap two. In his debut in a dirt car, Lofton found victory lane.
LB-7.jpg
In 2010 Lofton made the move full-time to NASCAR, racing within the Camping World Truck Series. He earned eight top-10s and four top-fives, with a best finish of third on one of the circuit’s most challenging tracks in Dover. He closed out his rookie season with a solid 12th place showing in the driver point standings. After being one of the most sought after free agents within the Camping World Truck Series garage during the off season, Lofton started the 2011 season with Germain Racing. During the first nine races with Germain, he earned a best finish of 10th.  Beginning in Kentucky in July, he returned to Eddie Sharp Racing (ESR), where he earned his ARCA championship, to finish out the remainder of the ’11 season. Through the second half of the year he picked up two more top-10 runs to bring his season total to three, with a best finish of seventh on the intense short track in Bristol. He also garnered a highest qualifying effort of fifth at Kentucky. After the season’s 25 events, he showed 14th in the driver point standings.
Following the NASCAR season, Lofton returned to his off-road racing roots. He dominated the Best In the Desert (BITD) Racing Association’s Henderson 250 in his Class 1500 Jimco Buggy by taking the top qualifying position and leading the way with an impressive stretch from start to finish. He earned the race win with over a 13-minute lead over the rest of the field.
Once the race season was complete, Lofton shifted his focus back to the Justin Lofton Charity Golf Tournament, which he hosts every January during the off-season. For the second straight year, the event was a success. Both years Lofton has raised over $40,000 for the Boys & Girls Clubs in his local community. However, it took Lofton just one day after the tournament to shift his focus back to racing, as he headed back to the desert to pre-run for the 2012 off-road racing season.