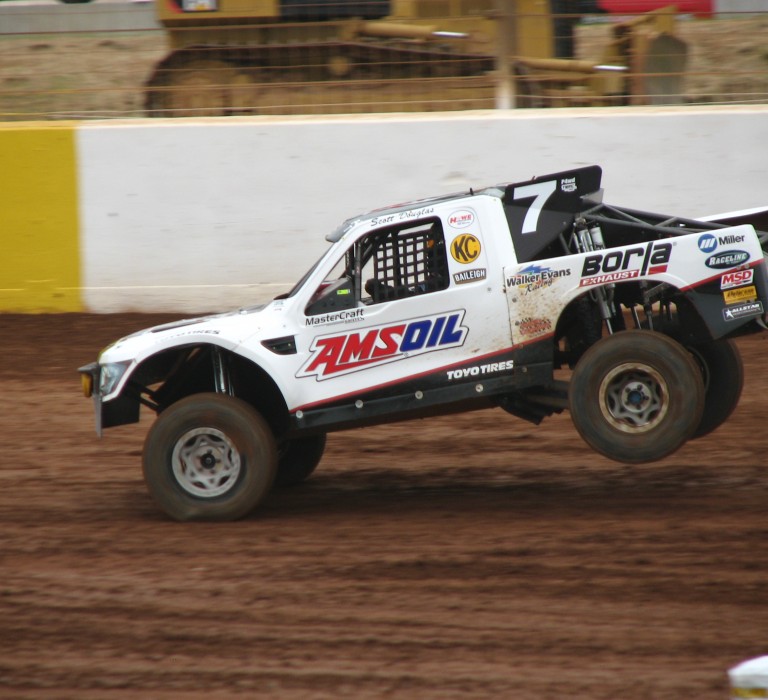 Over the years Douglas has driven everything from stock classes to the wild unlimited trucks, including SCORE trophy trucks and Short-Course PRO-4s. The result is no less than 83 career victories and 11 championships:

Eleven Championships and Counting!
San Felipe is a sleepy, old-world fishing village located on the Gulf of California part way down the infamous Baja California Mexican peninsula. For the past 20-years, the annual Tecate SCORE San Felipe 250 has turned the town into race central, hosting what is widely recognized as one of off-road racing’s premiere events. It was here in 1993 that veteran off-road racer Scott Douglas did the impossible—taking first overall in a Class 7 Ford Ranger mini-truck. To do so, Douglas had to beat the big factory teams fielding unlimited full-size trucks and the incredibly fast Class 1 entries in his Herzog Racing Ranger. An incredible feat to say the least, but it is now just one more footnote in career of this 11-time off-road champion. Scott Douglas began his off-road career racing motorcycles in the California desert.
Douglas moved from two to four wheels in 1980 when he and brother, Steve, took out a loan and purchased an old Ford F-150 race truck off a used car lot. Not ones to ease into things, the Douglas brothers prepped the truck and promptly entered it in the infamous Baja 500. Amazingly, not only did the Douglas brothers finish the race, but posted an impressive 5th in Class 8.
Douglas’ career took another major leap in 1990 when off-road legend Walker Evans recognized the up-and-coming talent and hired Douglas to pilot a factory backed Jeep Cherokee. The result was a class championship for Jeep and Walker Evans Racing. Evans then moved Douglas to a Dodge factory ride in a Class 7 Dakota where he regularly finished ahead of the likes of Roger Mears and Parnelli Jones. At various stages of his career, Scott Douglas has raced with and beaten Robby Gordon, Walker Evans, Ivan Stewart, and Jimmie Johnson. In the desert, Douglas has won championships in SCORE, HDRA, and the BITD series.